Smartphone cameras are awesome, they now go all the way up to 4k, which is more than enough for the majority of us.

The DJI Osmo Mobile appeared to offer the best of both worlds, allowing you to using the quality of your smartphone camera, along with a kick-ass gimbal for stabilisation to give you cinematic shots.

Now, for those familiar with DJI products, they’ve previously released the DJI Osmo, which is the same as this but it has a built in camera. They are also the guys behind the DJI Phantom 4 drones, which are also awesome, and they have really really good gimbals.

As you know from my reading my blog, I love using my smartphone for creating video content, so when the DJI Osmo Mobile was announced, I thought all my Christmas’ had come at once.

So I quickly placed my order on the DJI website and opted for all of the bells and whistles.

I’m sure other tech enthusiasts do this, but I carried out a LOT of research on YouTube.. looking for ‘how to’ videos and sneak previews of the Osmo Mobile. Well, this is exactly what I did and I was blown away with the official DJI videos of the Osmo Mobile in action (who wouldn’t be).

However, what started to become quite clear is an issue with larger smartphones, such as the iPhone 6s and 7 Plus models. A lot of the videos posted had a bobbling / vibration effect, which means that your videos weren’t as smooth as they should be or as pictured in the video above!

Lee Booth was one of the lucky few to get their hands on the Osmo Mobile first – you can see the adverse effects in his YouTube video at the top of this article.

It appears the cause of the issue is down to the weight of the smartphone, despite the iPhone Plus models being in range of the maximum weight.

In response to this, DJI help posted a video tutorial showing you how to”walk” to avoid the bobbling. See below:

However, this defeats the object for me and I’m sure vloggers out there will feel the same…  I can’t walk like this everywhere I go! It’s ridiculous! I’d prefer a shaky hand-held video any day…

So… it’s with regret, I’ve cancelled my DJI order until I know these issues have been sorted out. 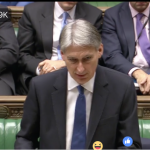 Did you watch the Autumn Statement Live on Facebook? 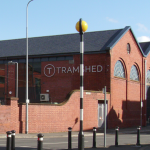 Cardiff to get free digital skills training with Google Garage